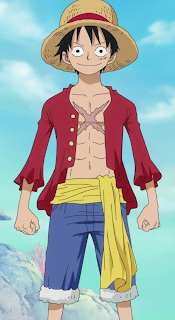 About Story Luffy All Story Monkey D Luffy In One Piece with All Kru.     Monkey D. Luffy (モンキー･D･ルフィ Monkī D. Rufi?) is a pirate and the main protagonist of the anime and manga, One Piece. He is the son of the Revolutionary Army's commander, Monkey D. Dragon, the grandson of the famed Marine, Monkey D. Garp, the foster son of a mountain bandit, Curly Dadan, and the adopted brother of the late "Fire Fist" Portgas D. Ace and Sabo. His life long goal is to become the Pirate King by finding the legendary treasure left behind by the Pirate King, Gol D. Roger. He believes that being Pirate King means one has the most freedom in the world. He has eaten the Gomu Gomu no Mi. As the founder and captain of the Straw Hat Pirates, he is the first member that makes up the crew, as well as one of its top three fighters. Luffy has a worldwide reputation for causing trouble, even among the Shichibukai, the Marines, and even challenging a Yonko, committing crimes against, as well as actio
Post a Comment
Read more